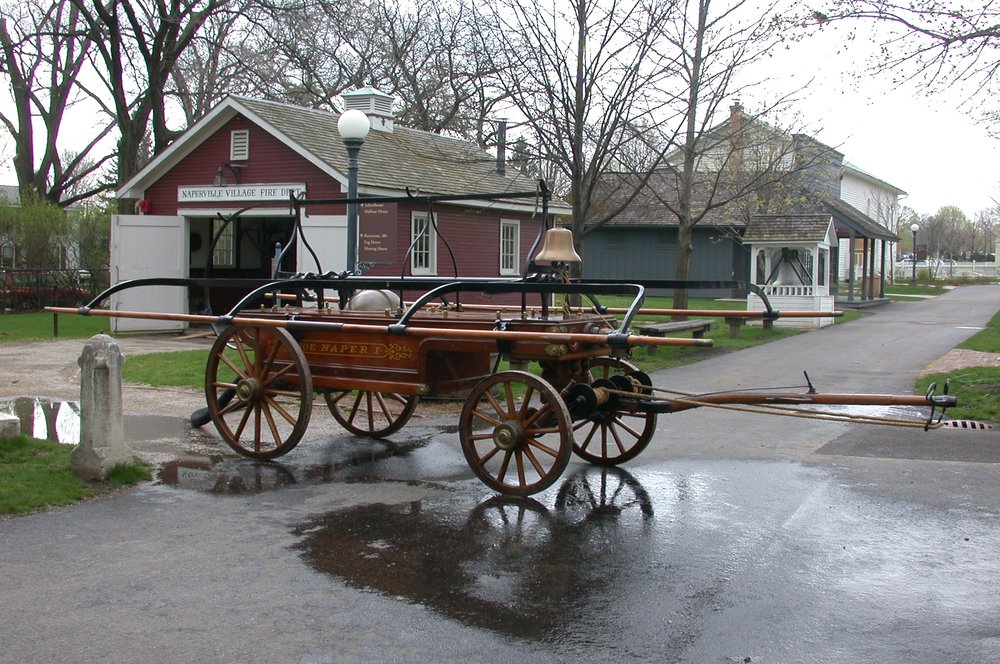 Six days after the Little Joe Naper was purchased, a fire broke out in downtown Naperville. At the sound of the alarm bell, the Hook and Ladder Company rushed to the firehouse and hauled the pumper to corner of Main Street and Jefferson Avenue, where a drug store burned: “The boys had the hose laid from the river in a jiffy and the engine boys were ready to act within fifteen minutes after the first alarm, but the machine wouldn’t work and a look of despair settled down upon those who had placed so much dependence upon the little Joe Naper.” As it turned out, the little Joe Naper was inoperable due to too much care and attention—it had been oiled in the wrong places and several nuts had been incorrectly adjusted. Businessmen in nearby buildings acted, hauling the contents out of their establishments and stowing them a safe distance away. Meanwhile, someone had the foresight to send a telegram to Aurora asking for help as the fire began to spread: “It had eaten up the drug store, harness shop, express office, and was just ready to leap into Ehrhardt’s shoe shop and Ruchty’s dwelling when glad tidings in the shape of water was sent up to the multitude through the hose from the river.” With help from Aurora, the buildings were saved. Marveling at the efficiency of the Aurora Fire Department, the people of Naperville formed a paid fire department in 1875. For the first time, the Naperville Fire Department had members who were trained and paid on call.