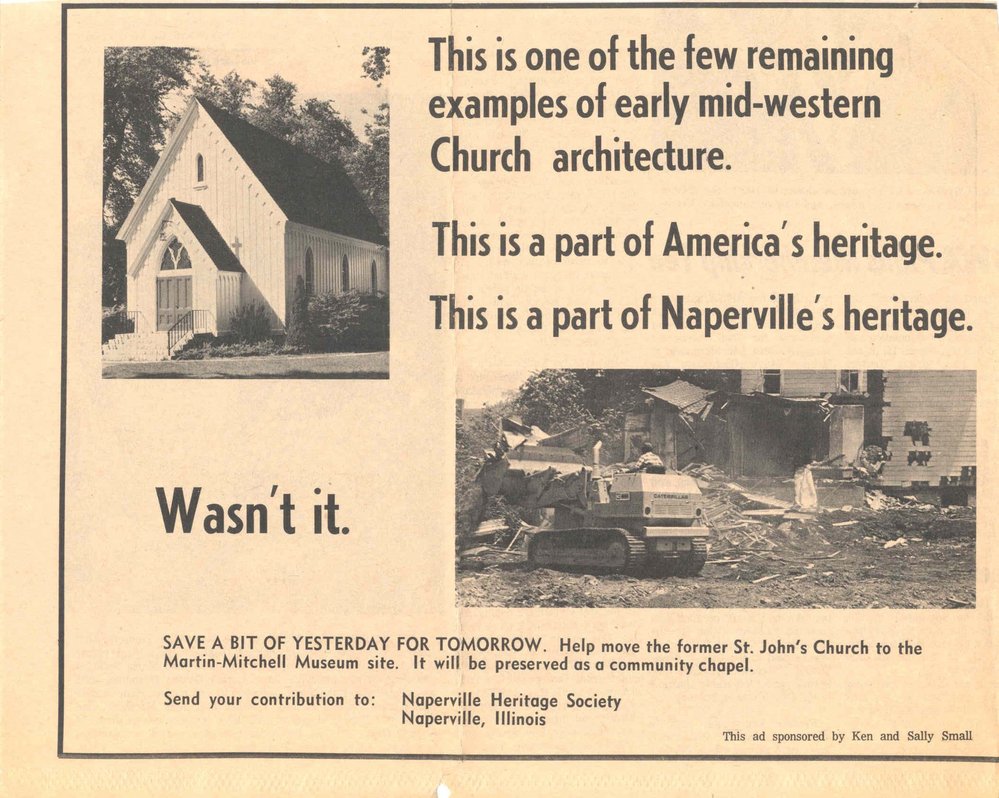 This Gothic revival church served the congregation until the late 1960s. The church was planned for demolition when the Naperville Heritage Society had it deconsecrated, renamed Century Memorial Chapel, and relocated to the grounds of the newly developed Naper Settlement in 1970. Duane Wilson was one of the founders of the Naperville Heritage Society and served as its first Treasurer in 1969, the year the Chapel was moved to its current location:

“The Chapel, as it stands at Naper Settlement now, was actually what gave the community the impetus to organize the Heritage Society. As treasurer I headed the campaign to raise the money to move the Chapel to Naper Settlement. As soon as it was moved, there was work that needed to be done. The floors were cleaned up and painted, as were the pews. We all knew that the ceiling and walls had been painted white to brighten the place up, but we could tell that there was nice pattern work underneath the white. The exterior, which had been white in all of our memory, was not original. The first restoration to authenticate it was to paint it brown, like it had been originally. That surprised a lot of people in town. As it had stood at Ellsworth and Jefferson Street, it was stark white with a bright red door. It was moved in June of 1970, and before the year was over there were weddings being held there, and of course we still have a couple hundred a year. The Chapel became the first event in what became numerous efforts to preserve what you see now at Naper Settlement. Naper Settlement is not finished. Some people, especially in the early days, kept asking, ‘When will it be done?’ And I always had to say, ‘Never. It will never be finished. It will always be a work in progress.’”

Back to Home
Previous