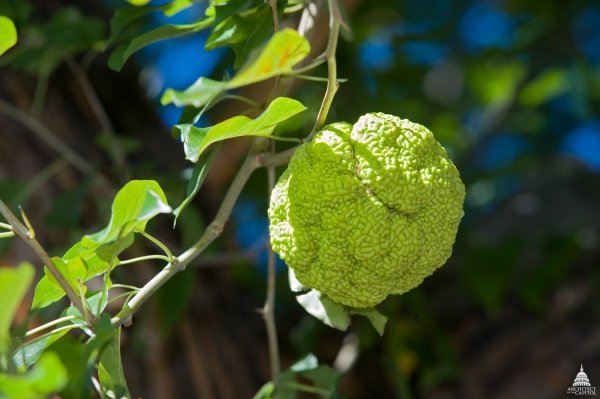 The osage orange tree, or Maclura pomifera, was native to the Red River drainage of Oklahoma, Texas, and Arkansas before settlers began cultivating it throughout the United States. It first arrived in Illinois in the 1830s, introduced by an Illinois College professor, John Turner. Turner believed the largest obstacle to the continued growth of Illinois was the lack of appropriate fencing material for crop and livestock farming. At the time, much of Illinois was treeless prairie, making it difficult for farmers to build enough fencing for their farms to prosper. Turner became a strong advocate for the use of the osage orange tree as natural fencing, believing that one osage orange hedge around a farm “secures orchards, fruit-yards, stables, sheepfolds, and pasture grounds, from all thieves, rogues, dogs, wolves, etc.” Although Midwestern farmers initially condemned the use of the osage orange hedges as “Turner’s Folly,” “hedge mania” quickly infected the Midwest, with some estimating that over 250,000 miles of osage orange hedges were planted in the 1800s. One 1850s commentator praised the osage orange as a natural fence, writing “What a beautiful sight will the rich prairies of Illinois present, when covered with farms enclosed by the osage orange!” The craze even reached Naperville; one of the local nurseries, the DuPage County Nurseries, sold osage orange seeds and plants. However, with the advent of barbed wire in the 1870s, osage orange trees fell out of favor as fencing material. However, osage orange trees continue to dot the Illinois landscape, including the grounds of Naper Settlement.